Federal Member for Newcastle Sharon Claydon has used Public Education Day to launch a local campaign against the Turnbull Government’s planned cuts to school funding which will see Newcastle’s public schools lose an average of $350,000 in the next two years. 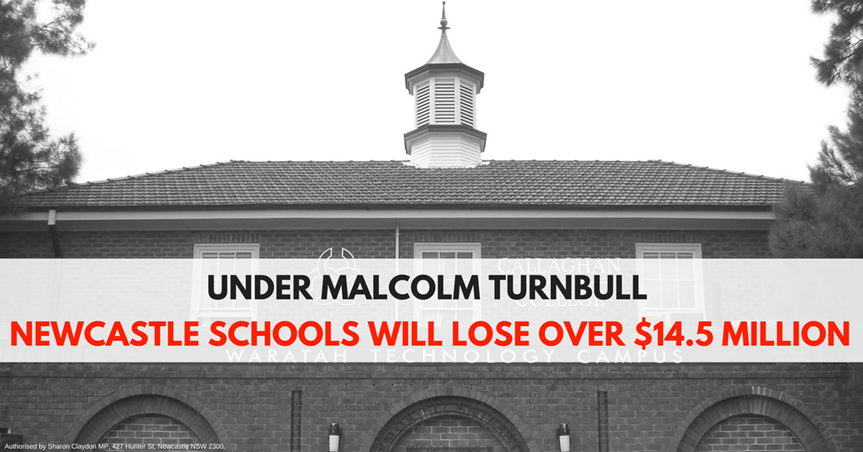 Ms Claydon said she had launched a webpage with detailed data on how much each Newcastle public school will lose in the next two years if the Government’s school funding plan proceeds, along with a petition for Novocastrians to voice their opposition.

“The Turnbull Government is abandoning signed contracts with the New South Wales Government which will see Newcastle’s public schools $14.5 million worse off the next two years alone,” Ms Claydon said.

“I’ve launched the Newcastle School Cuts web page so that parents, students and other members of school communities can find out exactly how much is on the line for their local public school.”

Ms Claydon accused the Government of ‘brazen deception’ in its attempts to misrepresent the cuts.

“The Turnbull Government has been using Tony Abbott’s planned $30 billion worth of cuts as a comparison baseline in an attempt to deliberately disguise how deep these cuts will go,” Ms Claydon said.

“Mr Turnbull has cynically appropriated the Gonski brand, but none of the Gonski substance. Despite what the Turnbull Government says, this plan isn’t needs-based, it isn’t sector blind and it will hurt our children

Ms Claydon said it was clear the government was ripping money out of school funding to help pay for its corporate tax cuts, which have now blown out to $65 billion.

“When given a choice between properly funding our schools and giving big business a tax cut, the Turnbull Government has chosen big business,” Ms Claydon said.

“Economists agree that investing in schools is a much better way of generating economic growth than corporate tax cuts.”

To find out more about the impact of the Turnbull Government’s school on individual public schools visit www.sharonclaydon.com/newcastle_school_cuts