Sharon Claydon today joined State Member for Wallsend and Shadow Minister for the Hunter, Sonia Hornery, on a walk from Broadmeadow Railway Station to Hunter Stadium, to assess the safety and accessibility of the pedestrian route for sporting fans. 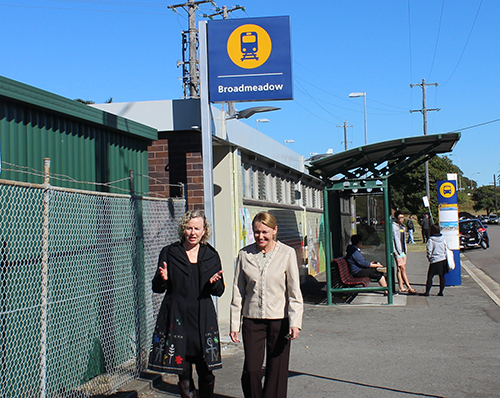 Hunter Stadium is the home ground for NRL club the Newcastle Knights and the A-League’s Jets and will play host to four matches at next year’s AFC Asian Cup, an event that expects to attract more than 45,000 international visitors to Australia.

“The AFC Asian Cup is one of the largest events Australia will ever host and it’s great that we will have four games here in Newcastle,” Ms Claydon said.

“With the marquee match-ups we are due to host, it’s expected that there’ll be a large number of visitors coming to Newcastle and public transport will play a key role in getting spectators to and from the ground,” Ms Claydon added.

The pedestrian route is the main thoroughfare for spectators travelling to the ground by rail. While the 1.2 kilometre route is flat and has some directional signage, a number of improvements are needed to ensure better accessibility for wheelchair users and safety for all.

“It’s a relatively easy walk but there are a few issues that need to be addressed,” Ms Hornery said.

“There a number of tree roots along Broadmeadow Road that have damaged the pathway and there’s a section of the route that requires all pedestrians to travel on a side road rather than on a dedicated footpath. Both present safety concerns for wheelchair users and walkers alike.”

“As all of the AFC Asian Cup games are night matches, adequate lighting of the route also needs to be assured to ensure the safety of users. It appears as though some sections of the walkway, particularly alongside the Styx Creek canal, require improved and dedicated lighting.”

Ms Hornery and Ms Claydon are both committed to working with Newcastle City Council, the NSW Government and AFC Asian Cup Local Organising Committee to improve the route in readiness for the Asian Cup in January 2015