Federal Member for Newcastle Sharon Claydon has launched a community campaign to stop oil and gas rigs being built off the coast of Newcastle.

Ms Claydon said the Federal and State governments are currently assessing an application to extend the PEP11 Petroleum Exploration Permit which extends from Newcastle to Sydney’s Northern Beaches.

“Newcastle has lived under the spectre of PEP11 since it was first granted in 1999. In this time, its achieved nothing but caused great distress and anxiety throughout our community,” Ms Claydon said.

“The Morrison Government needs to reject the application to extend PEP11 and ensure that oil and gas rigs never darken Newcastle’s waters. This is the first opportunity there’s been in a number of years to see the back of this project once and for all.”

“The idea that you would set up oil and gas rigs on one of the busiest east coast sea routes next to some of our most populous cities and towns is just ridiculous.

“Australia has plenty of energy sources without setting up oil rigs off the New South Wales coast.”

Ms Claydon said the community was united in their opposition to the project extension.

“As a coastal city, the ocean is at the very the core of our identity, and Novocastrians feel any threat to its fragile ecosystem very deeply. Indeed, I have received many hundreds of heartfelt letters, emails and calls, imploring me to oppose this development.

“I urge anyone with an interest in protecting our precious coastal waters to sign the petition on my website or in my office.”

Novocastrians can sign the petition online or at Sharon Claydon’s office at 427 Hunter Street Newcastle. 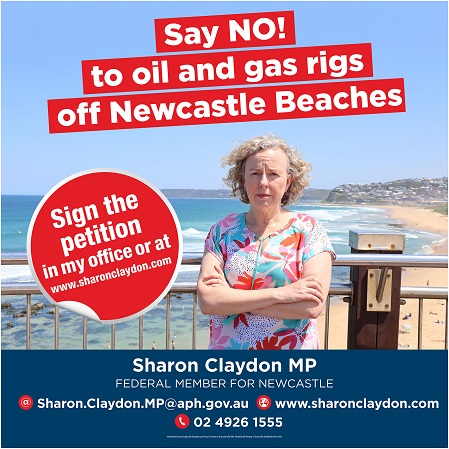