CASTING A GENDER LENS OVER THE FEDERAL BUDGET 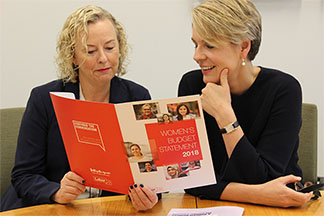 “Budget decisions affect men and women very differently because of differences in how they live their lives, the work they do, and the roles they play in society. Women are often disproportionately impacted by Budget choices, but unless we measure these things, equality can slip further and further out of reach,” Ms Claydon said.

Ms Claydon said Labor had taken on the responsibility of producing the annual Women’s Budget Statement from Opposition since it was axed by the Abbott Government.

“In a clear sign of the priority the Liberals place on gender quality, the Liberals axed the Women’s Budget Statement in its first year in power,” Ms Claydon said.

“Since then, Australia has plummeted from 24th to 46th in global gender rankings and in the past decade we have fallen from 12th to 42nd in the World Economic Forum’s gender pay gap rankings.”

“Budget choices on taxes, spending and social programs are not gender neutral. This Budget means further job cuts in agencies with significant female workforces and it was notably silent on how it would address the housing crisis for older women. There was also next to nothing to address the gender pay gap, inequities in superannuation, or the unfair tax on tampons,” Ms Claydon said.

“And even though the Government has been talking up action on the enormous problem of economic insecurity for women, there is no detail and no funding in the Budget to back this up.”

Ms Claydon said the Women’s Budget Statement would be reinstated under a Shorten Labor Government.

“Labor understands that the Women’s Budget Statement is a critical means of holding governments to account and ensuring that gender equality is placed at the very centre of government decision making.”