The event, held at the Ethnic Communities Council in Waratah, saw the community come together to call on the Abbott Government to restore the $11.5 million in funding cut from the Building Multicultural Communities Program last year. 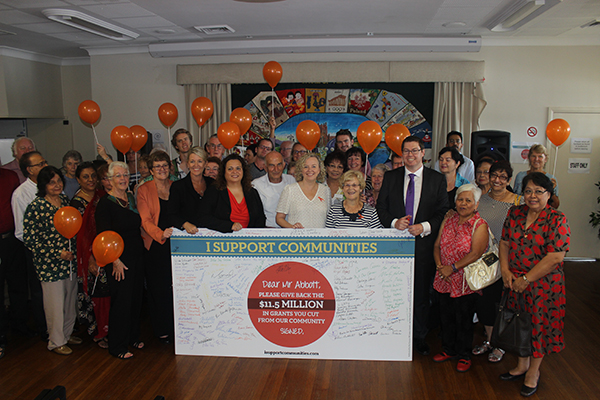 A number of organisations from Newcastle and Lake Macquarie were to share in over $500,000 through this program, and many are now tens of thousands of dollars out of pocket as a result of the funding being stripped away.

Ms Rowland said the Abbott Government’s decision to rip funding from multicultural groups was a disgrace and would have an adverse impact on the community.

“Tony Abbott and Kevin Andrews have cruelly cut grants to organisations that work to maintain cohesive and socially inclusive neighborhoods in the Hunter Newcastle region and regions right around Australia,” Ms Rowland said.

“The best way that governments can help build inclusive, harmonious communities is from the bottom up, by supporting grassroots programs like this.”

Ms Claydon said she was disappointed that so many of Newcastle’s multicultural organisations have had their approved funding snatched away by the Abbott Government.

“These cuts mean that the Ethnic Communities Council can no longer build Australia’s first multicultural Men’s Shed. Not once during the election campaign did the Liberals tell anyone about these cuts,” Ms Claydon said.

Mr Conroy said the Government had made a shambles of the program and needed to fix the mess they created by restoring their funding.

“These grants were fully budgeted and these groups were told by the Abbott Government after the election the money was assured. Then the Government changed their mind and cut it. Now they’ve changed their mind again and are offering compensation to some groups, but only for a fraction of what they’ve outlaid, and some get nothing at all.” Mr Conroy said.

“This is no way to administer a Government program and it’s no way to treat these people who do good work in our community.”

Ms Rowland also encouraged the community to send Tony Abbott a message about his cuts to multicultural organisations by visiting www.ISupportCommunities.com

Organisations that have had their funding ripped away: