The Abbott Liberal Government have abandoned all plans for high-speed broadband in Newcastle and residents have been left in total limbo, with no timetable for connection and no advice on what sort of service they will eventually get. 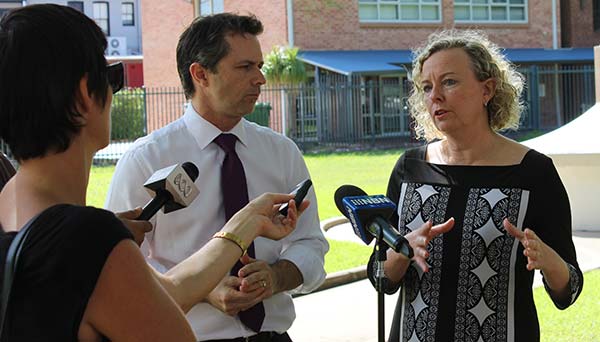 On Monday 10 March, Shadow Communications Minister, Jason Clare, and Sharon Claydon visited Mayfield where construction on Labor’s National Broadband Network commenced last year. Work was due to expand to nearby Hamilton and New Lambton in late 2013.

All construction has ceased however, and the entire electorate of Newcastle has been wiped off the rollout plans for the Liberal Government’s inferior network that relies on a mix of technologies with varying performance and capacity.

"I have sought answers from the Government on behalf of Newcastle residents but have been left frustrated by the empty responses I have received," Ms Claydon said.

"There are people in the electorate who have no access to broadband at all, let alone high-speed. When I have asked the government when they plan on connecting Newcastle they advise to be patient and wait. Ironically they even tell constituents to keep checking a website to see when we they will be included."

"This government simply don’t have a plan for Newcastle. Under Labor the entire electorate was due to be connected with fibre to their home within three years. Under this government we have no timetable for connection and no idea what sort of broadband speed we’ll eventually get."

Households are not the only ones being left behind, with Newcastle’s up and coming digital economy in danger of stalling.

"Today I met with some of the brightest digital minds in the country who are working on projects that have the potential to change the way businesses and communities operate around the world."

"But without high-speed broadband they'll be left behind, unable to compete in the digital economy. We want start-up companies and new enterprises to call Newcastle home, but they need assurances about the services they will have access to."

Mr Clare recently presented a petition to Parliament on behalf of more than 270,000 Australians, including many Novocastrians, calling for a real high-speed broadband network. Watch his presentation to Parliament here.

"We need a real high-speed broadband network, not the hotch potch of service and capacity the Abbott Government is proposing."