She is also Deputy Chair of the Joint Select Committee on the Royal Commission into Institutional Responses to Child Sexual Abuse - Oversight of redress related recommendations, and serves as a member of the National Apology to Victims and Survivors of Child Sexual Abuse Reference Group.

In March 2015, she became a Member of the Speaker’s Panel, deputising for the Speaker in the House of Representatives.

Sharon is a fifth generation Novocastrian with strong connections to her local community. She is an Honours graduate in Anthropology and, before entering Parliament, worked in remote Aboriginal communities and the community-based disability services sector. Sharon also served in local government as a Newcastle City Councillor.

Sharon is a strong advocate for social justice, equality and sustainability. 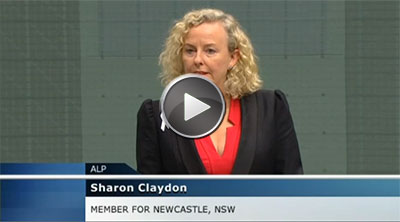